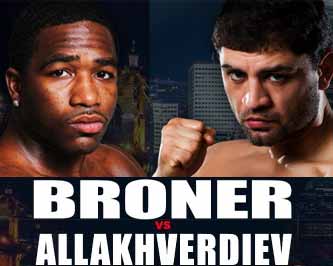 Review by AllTheBestFights.com: 2015-10-03, good fight between Adrien Broner and Khabib Allakhverdiev: it gets three stars.

The former world champion in three different weight classes Adrien Broner entered this fight with a pro boxing record of 30-2-0 (22 knockouts) and he is ranked as the No.7 super lightweight in the world (currently the #1 in this division is Terence Crawford). ‘The Problem’ has already fought twice in 2015 beating John Molina Jr (=Broner vs Molina) but then he lost to Shawn Porter (=Broner vs Porter).
His opponent, the former Wba and Ibo champion Khabib Allakhverdiev, has a record of 19-1-0 (9 knockouts) but he is not ranked as he hasn’t fought since April 12, 2014 when he suffered his first professional defeat, against Jessie Vargas (=Vargas vs Allakhverdiev). Broner vs Allakhverdiev is valid for the vacant WBA World super lightweight title. Watch the video and rate this fight!

Review: 2014-04-12, disappointing fight between Jessie Vargas and Khabib Allakhverdiev: it gets two stars. Both undefeated, the American Jessie Vargas entered this fight with a boxing record of 23-0-0 (9 knockouts) and he is ranked as the No.5 light welterweight in the world, he is 24 years old (seven years younger than Allakhverdiev) and last year he fought twice winning the vacant WBC Continental Americas welterweight title against Wale Omotoso.
His opponent, the Russian Khabib Allakhverdiev, has a record of 19-0-0 (9 knockouts) and he entered as the No.8 in the same weight class (currently the #1 in this division is Danny Garcia), he fought just once in 2013 defeating Souleymane M’baye (=Allakhverdiev vs M’baye). Vargas vs Allakhverdiev is valid for the IBO and WBA World light welterweight titles, both belt held by Allakhverdiev (first world title shot for Vargas); undercard of Manny Pacquiao vs Timothy Bradley 2. Watch the video and rate this fight!