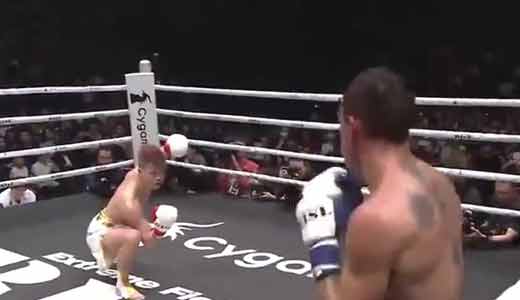 Review by AllTheBestFights.com: 2019-03-10, spectacular finish between Tenshin Nasukawa and Federico Roma: this is one of the best kickboxing fights of 2019 and it gets four stars!.

The undefeated black belt in karate and former ISKA world champion Tenshin Nasukawa entered this fight with a perfect kickboxing record of 28-0-0 (22 KOs=79%) and he is ranked as the No.5 featherweight in the world while his opponent, the WKN 58kg Muay Thai world champ Federico Roma, has an official record of 63-4-1 (31 knockouts) and he entered as the No.4 super featherweight. The Japanese fought five times last year winning over Rodtang Jitmuangnon, Kyoji Horiguchi and Taiki Naito in his last three; at the end of 2018 he also faced Floyd Mayweather Jr in a 3-round exhibition boxing match but it was a disappointing bout (Floyd Mayweather Jr vs Tenshin Nasukawa). Nasukawa vs Roma, main event of RISE 2019 1st Round, is the quarter-final of the Rise World Series 2019 -58kg torunament. Watch the video and rate this fight!