Review by AllTheBestFights.com: 2022-05-07, great start and spectacular finish: Michael Chandler vs Tony Ferguson is one of the best mma fights of the year 2022 and it gets four stars (UFC Performance of the Night).
Ferguson vs Chandler is on the undercard of Charles Oliveira vs Justin Gaethje – UFC 274. Watch the video and rate this fight!

Review by AllTheBestFights.com: 2021-11-06, good pace with a spectacular finish: the mma fight Frankie Edgar vs Marlon Vera is close to get four stars (UFC Performance of the Night – take a look at our ranking of the Best Mma Fights of 2021).
Vera vs Edgar is on the undercard of Kamaru Usman vs Colby Covington 2 – UFC 268. Watch the video and rate this fight! 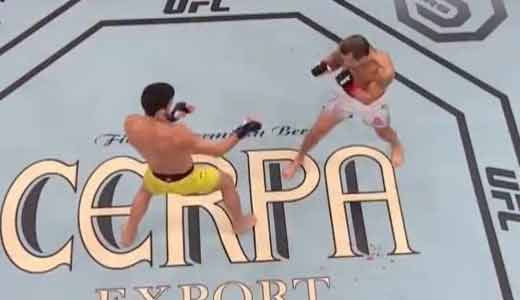 Review by AllTheBestFights.com: 2018-05-12, spectacular finish between Vitor Belfort and Lyoto Machida: this is one of the best mma fights of 2018 and it gets four stars!

The black belt in Bjj, judo and former Ufc Hw and light-Hw champion Vitor Belfort entered this fight with a pro record of 26-13-0 (81% finishing rate) and he is ranked as the No.13 middleweight in the world. ‘The Phenom’ Belfort lost three consecutive fights between 2016 and 2017: with Ronaldo ‘Jacare’ Souza (Belfort vs Jacare), Gegard Mousasi (Mousasi vs Belfort) and Kelvin Gastelum (then overturned in a no-contest because the American tested positive for marijuana, Belfort vs Gastelum), but then he has beat Nate Marquardt (Vitor Belfort vs Nate Marquardt).
His opponent, the black belt in karate, Bjj and former Ufc light-hw champion Lyoto Machida, has an official mma record of 23-8-0 (48% finishing rate) and he entered as the No.24 in the same weight class. He also lost three consecutive bouts between 2015 and 2017, with Luke Rockhold (Machida vs Rockhold), Yoel Romero (Machida vs Romero) and Derek Brunson (Brunson vs Machida) but he came back to win in 2018 against Eryk Anders (Lyoto Machida vs Eryk Anders). Machida vs Belfort is on the undercard of Amanda Nunes vs Raquel Pennington – UFC 224. Watch the video and rate this fight! 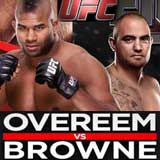 Review: 2013-08-17, tough fight with a spectacular finish: Alistair Overeem vs Travis Browne is close to get four stars (UFC Knockout of the Night). Alistair Overeem (36-12-0, 95% finishing rate) entered as the No.6 heavyweight in the world while Travis Browne (14-1-1, 85% finishing rate) entered as the No.11. Overeem vs Browne is on the undercard of Mauricio ‘Shogun’ Rua vs Chael Sonnen – UFC Fight Night 26 (first UFC event broadcast on Fox Sports 1). Watch the video!