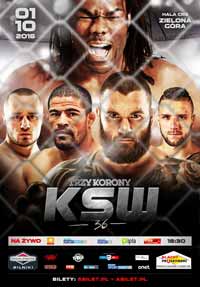 The black belt in Bjj, former M-1 Global and current KSW light-Hw champion Tomasz Narkun entered this fight with a record of 12-2-0 (100% finishing rate) and he is ranked as the No.20 light heavyweight in the world. He suffered his last defeat when he faced Goran Reljic in 2014, after this bout he has won three fights taking revenge on Reljic in 2015 (=Reljic vs Narkun 2) and beating Cassio Barbosa de Oliveira in 2016.
His opponent, the black belt in judo and former KSW light-Hw champion Rameau Thierry Sokoudjou, has a mma record of 17-14-0 (70% finishing rate) and he entered as the No.54 in the same weight class but he lost twice in 2015, against Linton Vassell (=Vassell vs Sokoudjou) and Paul Buentello. After this fight he came back to win in 2016 against Matt Hamill. Narkun vs Sokoudjou is valid for the KSW light heavyweight title (Narkun’s second defense); undercard of Rousimar Palhares vs Michal Materla – KSW 36. Watch the video and rate this fight!

Review by AllTheBestFights.com: 2016-10-01, good finish between Michal Materla and Rousimar Palhares: it gets three stars.

The black belt in Brazilian jiu-jitsu and former Wsof Ww champion Rousimar Palhares entered this fight with a pro record of 18-7-0 (83% submission victory rate – he has never won via ko/tko) and he is ranked as the No.16 welterweight in the world but he comes off the loss against Emil Weber Meek.
His opponent, the former KSW Mw champion Michal Materla, has an official mma record of 23-5-0 (74% finishing rate) and he entered as the No.38 middleweight. He lost to Mamed Khalidov in 2015 (=Khalidov vs Materla) but he came back to win in 2016 against Antoni Chmielewski (=Materla vs Chmielewski). ‘Toquinho’ Palhares vs Materla is the main event of the KSW 36. Watch the video and rate this fight!