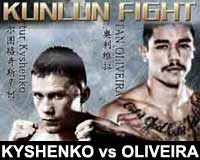 Review by AllTheBestFights.com: 2015-04-26, pretty good fight between Artur Kyshenko and Jonatan Oliveira: it gets three stars.

Artur Kyshenko entered this fight with a professional kickboxing record of 60-12-1 (32 knockouts) and he is ranked as the No.4 super middleweight in the world. He lost to Karapet Karapetyan in 2014 but then he came back to win beating Radoslaw Paczuski (=Kyshenko vs Paczuski), Andrei Leustean and Bai Jinbin (=Kyshenko vs Jinbin).
His opponent, Jonatan Oliveira, has an official record of 20-4-0 (11 knockouts) and he entered as the No.9 in the same weight class but he comes off the loss against Raymond Daniels at Glory 19 (=Daniels vs Oliveira). Kyshenko vs Oliveira is the semifinal of the Kunlun Fight 80kg tournament (Group A) – Kunlun Fight 23. Watch the video and rate this fight!