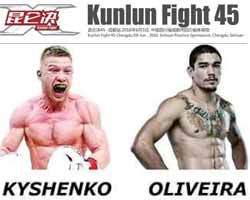 Review by AllTheBestFights.com: 2016-06-05, close fight but not so exciting: Artur Kyshenko vs Jonatan Oliveira 2 gets two stars.

The 2015 Kunlun -80kg champion Artur Kyshenko entered this fight with a pro kickboxing record of 67-3-1 (36 knockouts) and he is ranked as the No.2 super middleweight in the world. He suffered his last loss when he faced Karapet Karapetyan in 2014, since then he has won 11 consecutive bouts beating Murthel Groenhart in his last one (=Kyshenko vs Groenhart 2).
His opponent, Jonatan Oliveira, has a record of 20-5-0 (11 knockouts) and he entered as the No.16 in the same weight class but he comes off three consecutive losses: against Raymond Daniels (=Daniels vs Oliveira) and Artur Kyshenko in 2015 (=Kyshenko vs Oliveira I), and with Meran Zangana in 2016. Kyshenko vs Oliveira 2 is on the undercard of Buakaw Banchamek vs Wang Weihao – Kunlun Fight 45. Watch the video and rate this fight!

Review by AllTheBestFights.com: 2016-06-05, pretty good fight between Buakaw Banchamek and Wang Weihao: it gets three stars.

The two time K-1 World MAX champion Buakaw Banchamek, formerly known as Buakaw Por Pramuk, entered this fight with a professional kickboxing record of 267-43-12 (69 knockouts) and he is ranked as the No.7 super welterweight in the world while his opponent, Wang Weihao, has an official record of 46-6-0. Buakaw lost to Khayal Dzhaniev last year (4-stars-fight Buakaw vs Dzhaniev), but then he came back to win beating three Chinese fighters: Gu Hui (=Buakaw vs Hui), Liu Hainan (=Buakaw vs Hainan) and Kong Lingfeng (=Buakaw vs Lingfeng). Buakaw vs Weihao is the main event of Kunlun Fight 45. Watch the video and rate this fight!