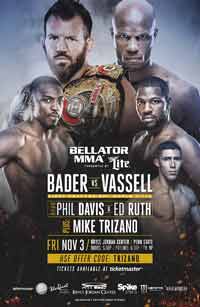 Review by AllTheBestFights.com: 2017-11-03, fight not particularly exciting between Phil Davis and Leo Leite: it gets two stars.

The former Bellator light-Hw champion Phil Davis entered this fight with a mma record of 17-4-0 (47% finishing rate) and he is ranked as the No.4 light heavyweight in the world (currently the #1 in this division is Daniel Cormier) but he comes off the loss against Ryan Bader (=Davis vs Bader 2). Before this bout he had beat Muhammed ‘King Mo’ Lawal (=Davis vs Lawal) and Liam McGeary in 2016 (=McGeary vs Davis).
His opponent, the undefeated black belt in Judo and Brazilian jiu-jitsu (four time Bjj world champion) Leonardo Leite, has a perfect record of 10-0-0 (60% finishing rate) and he entered as the No.68 in the same weight class. He fought three times last year winning over Matt Masterson, Julio Juarez and Moise Rimbon. Davis vs Leite is on the undercard of Ryan Bader vs Linton Vassell – Bellator 186. Watch the video and rate this fight!