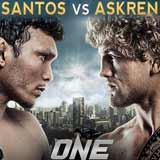 Review by AllTheBestFights.com: 2015-04-24, disappointing finish between Ben Askren and Luis Santos: it gets two stars.

The undefeated former Bellator Ww champion Ben Askren entered this fight with a perfect mma record of 14-0-0 (57% finishing rate) and he is ranked as the No.13 welterweight in the world; he fought twice last year beating Bakhtiyar Abbasov (=Askren vs Abbasov) and Nobutatsu Suzuki (fight in which he won the One Fc title, Askren vs Suzuki).
His opponent, the black belt in Brazilian jiu-jitsu Luis ‘Sapo’ Santos, has an official record of 61-9-1 (77% finishing rate) and he entered as the No.54 in the same weight class. He suffered two consecutive losses between 2011 and 2012, against Ben Saunders (=Saunders vs Santos) and Ryan Ford (=Ford vs Santos), but since then he has won seven times beating Bakhtiyar Abbasov in his last bout. Askren vs Santos, main event of One FC 26, is valid for the ONE FC welterweight title (Askren’s first defense). Watch the video and rate this fight!

Review: 2012-05-04, good fight between Ryan Ford and Luis Santos: three stars (fight ended by TKO in the second round). Ryan Ford (17-4-0) entered as the No.71 welterweight in the world while Luis Santos (50-7-1) entered as the No.66. Ford vs Santosis is on the undercard of Michael Chandler vs Akihiro Gono (Bellator 67). Watch the video!

Review: 2011-10-08, nice fight with a lot of action on the ground between Ben Saunders and Luis Santos: three stars (Bellator 53). Saunders defeated Luis Santos by submission in the third round and get to the final of the Bellator Welterweight Tournament. Watch the video! 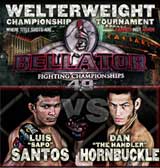