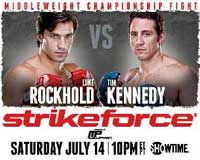 END_OF_DOCUMENT_TOKEN_TO_BE_REPLACED

Review: 2012-01-07, great fight ended by TKO in the first round between Luke Rockhold and Keith Jardine: three stars. Luke Rockhold (8-1-0) entered as the No.12 middleweight in the world while Keith Jardine (17-9-2) entered as the No.15. Rockhold vs Jardine is the main event of the night and is valid for the Strikeforce Middleweight Championship (Rockhold’s first defense). Watch the video!

END_OF_DOCUMENT_TOKEN_TO_BE_REPLACED

Review: 2011-09-10, pleasant fight between Ronaldo “Jacare” Souza and Luke Rockhold (5×5 minute rounds). Luke Rockhold defeated Ronaldo Souza by unanimous decision winning the “Strikeforce Middleweight Championship” (the holder of the title was “Jacare” Souza that entered as the No.5 middleweight in the world). Jacare vs Rockhold was on the undercard of Barnett vs Kharitonov. Watch the video!