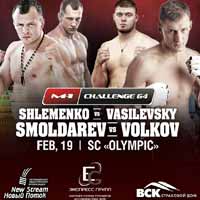 Review by AllTheBestFights.com: 2016-02-19, great performance by both fighters: Alexander Shlemenko vs Vyacheslav Vasilevsky is close to get four stars!

The former Bellator Mw champion Alexander Shlemenko entered this fight with a professional record of 51-9-0 (73% finishing rate) and he is ranked as the No.26 middleweight in the world. He suffered two consecutive defeats in 2014, against Tito Ortiz (fight in which he moved up in weight class to the light-Hw division, Shlemenko vs Ortiz) and Brandon Halsey (losing his Bellator title Shlemenko vs Halsey). After this bout he came back to win beating Yasubey Enomoto (=Shlemenko vs Enomoto) and Melvin Manhoef (then the result was overturned in a no-contest because the Russian tested positive for anabolic, Shlemenko vs Manhoef).
His opponent, the black belt in judo and former M-1 light-Hw and Mw champion Vyacheslav Vasilevsky, has a mma record of 27-3-0 (70% finishing rate) and he entered as the No.34 in the same weight class. He fought twice last year losing the rematch with Ramazan Emeev (=Vasilevsky vs Emeev 2) and winning over Kristijan Perak. Shlemenko vs Vasilevsky is the main event of the M-1 Challenge 64. Watch the video and rate this fight!

Review by AllTheBestFights.com: 2016-02-19, pretty good finish between Alexander Volkov and Denis Smoldarev but it is not enough to get three stars: it gets two.

The former Bellator Hw champion Alexander Volkov entered this fight with a pro record of 24-6-0 (79% finishing rate) and he is ranked as the No.30 heavyweight in the world but he comes off two consecutive defeats: against Tony Johnson (=Volkov vs Johnson) and Cheick Kongo (=Kongo vs Volkov).
His opponent, Denis Smoldarev, has an official mma record of 11-10 (73% finishing rate) and he entered as the No.42 in the same weight class. He suffered his only loss in 2014 when he faced Marcin Tybura (=Tybura vs Smoldarev), after this bout he has won over Maro Perak (=Smoldarev vs Perak) and Chaban Ka. Volkov vs Smoldarev is valid for the vacant M-1 Challenge heavyweight title; undercard of Alexander Shlemenko vs Vyacheslav Vasilevsky – M-1 Challenge 64. Watch the video and rate this fight!