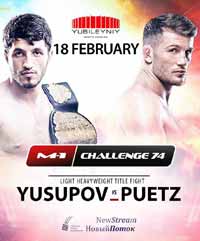 Review by AllTheBestFights.com: 2017-02-18, fight not particularly good between Rashid Yusupov and Stephan Puetz: it gets two stars.

The undefeated M-1 light-Hw champion Rashid Yusupov entered this fight with a perfect mma record of 7-0-0 (57% finishing rate) and he is ranked as the No.22 light heavyweight in the world. He fought once in 2016 winning over Viktor Nemkov.
His opponent, Stephan Puetz, has an official record of 15-2-0 (73% finishing rate) and he entered as the No.25 in the same weight class. He lost the rematch with Viktor Nemkov in 2015 (=Puetz vs Nemkov 2) but then he came back to win in 2016 beating Andrey Seledtsov and Marcus Vinicius Lopes. Rashid Yusupov vs Stephan Puetz, main event of M-1 Challenge 74, is valid for the M-1 Challenge light heavyweight title (Yusupov’s first defense). Watch the video and rate this fight!