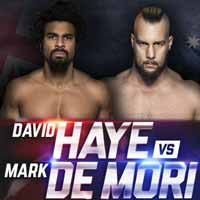 The former heavyweight and cruiserweight world champion David Haye entered this fight with a professional boxing record of 26-2-0 (24 KOs=92%) while his opponent, Mark de Mori, has an official record of 30-1-2 (26 KOs=87%). Haye is not ranked as he hasn’t fought since July 14, 2012 when he defeated Dereck Chisora (=Haye vs Chisora), before this bout Hayemaker had lost to Wladimir Klitschko (=Klitschko vs Haye). Haye vs de Mori is the main event of the evening. Watch the video and rate this fight!