Review: 2014-08-09, aggressive start and some tough exchanges between Dmitry Chudinov and Mehdi Bouadla: it gets three stars. The undefeated Dmitry Chudinov entered this fight with a pro boxing record of 13-0-2 (8 knockouts) and he is ranked as the No.15 middleweight in the world, he has already fought once in 2014 beating Patrick Nielsen in June (=Nielsen vs Chudinov).
His opponent, Mehdi Bouadla, has an official record of 30-5-0 (11 knockouts) and he entered as the No.60 in the same weight class, he suffered his last defeat in 2012 when he faced Arthur Abraham for the WBO super-Mw title (=Abraham vs Bouadla); since then he has fought and won four consecutive bouts. Chudinov vs Bouadla is valid for the interim WBA World middleweight title. Watch the video and rate this fight! 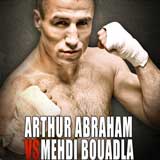 Review: 2012-12-15, pretty good fight between Arthur Abraham and Mehdi Bouadla: three stars. Arthur Abraham (35-3-0 with 27 victories coming by way of knockout) entered as the No.3 super middleweight in the world while Mehdi Bouadla (26-4-0) entered as the No.41. Abraham vs Bouadla is valid for the WBO super middleweight title (Abraham’s first defense). Watch the video! 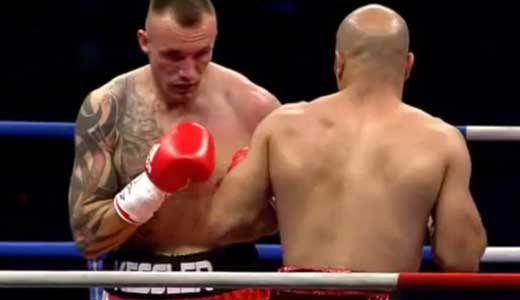 Review: 2011-06-04, Kessle returns to battle after more than a year against Mehdi Bouadla (former IBF International super middleweight champion) and the fight is exciting, with four knockdowns: four stars. Mikkel Kessler entered the fight with a record of 44-2-0 while Mehdi Bouadla had a record of 22-3-0. Kessler vs Bouadla is valid for the vacant WBO European super middleweight title. Watch the video!