Review by AllTheBestFights.com: 2015-08-01, fight not particularly exciting between Mike Kyle and Clifford Starks: it gets two stars.

Mike Kyle entered this fight with a mma record of 21-12-1 (81% finishing rate) and he is ranked as the No.46 heavyweight in the world while his opponent, Clifford Starks, has an official record of 11-2-0 (55% finishing rate) and he entered as the No.68 light heavyweight. Both fighters have fought once in 2015: Kyle has won over Baga Agaev while Starks defeated Jake Heun. Kyle vs Starks is on the undercard of Rousimar Palhares vs Jake Shields – WSOF 22. Watch the video and rate this fight!

END_OF_DOCUMENT_TOKEN_TO_BE_REPLACED 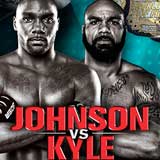 Review: 2014-01-18, the fight between Anthony Johnson and Mike Kyle gets three stars thanks to a good finish. Anthony Johnson entered this fight with a pro mma record of 15-4-0 (67% ko/tko victory rate, he has never won by submission) and he is ranked as the No.13 light heavyweight in the world, he comes off five-fight win streak after his last loss suffered against Vitor Belfort in 2012 (after that fight he was released from the Ufc). Mike Kyle is also a former Ufc fighter (but his last fight with the Ultimate Fighting Championship was in 2005), he has a record of 20-10-1 (80% finishing rate) and he entered as the No.28 heavyweight, he suffered two defeats in his last three fights. ‘Rumble’ Johnson vs Kyle is on the undercard of Justin Gaethje vs Richard Patishnock – WSOF 8. Watch the video and rate this fight!

END_OF_DOCUMENT_TOKEN_TO_BE_REPLACED

Review: 2013-09-14, some good shots between Andrei Arlovski and Mike Kyle but it is not enough to get three stars. Andrei Arlovski (19-10-0, 90% finishing rate) entered as the No.22 heavyweight in the world while Mike Kyle (20-9-1, 80% finishing rate) entered as the No.27 light heavyweight. Arlovski vs Kyle is the main event of WSOF 5 – World Series of Fighting. Watch the video!

END_OF_DOCUMENT_TOKEN_TO_BE_REPLACED 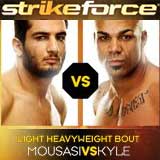 END_OF_DOCUMENT_TOKEN_TO_BE_REPLACED

Review: 2012-05-19, aggressive starts and nice submission in the first round: Rafael Cavalcante vs Mike Kyle 2 gets three stars. Rafael “Feijao” Cavalcante (11-3-0) entered as the No.15 light heavyweight in the world while Mike Kyle (19-8-1) entered as the No.22. In their first fight Kyle defeated Cavalcante by TKO (June 6, 2009); Feijao vs Kyle 2 is on the undercard of Josh Barnett vs Daniel Cormier. Watch the video!