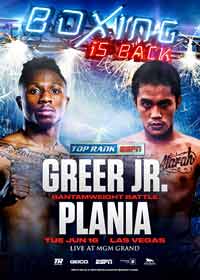 Review by AllTheBestFights.com: 2020-06-16, pretty good fight between Joshua Greer Jr and Mike Plania: it gets three stars.
Joshua Greer Jr entered this fight with a professional boxing record of 22-1-1 (12 knockouts) and he is ranked as the No.11 bantamweight in the world. He suffered his only loss when he faced Stephen Fulton in 2015 (via majority decision), since then he has won 19 consecutive bouts defeating Giovanni Escaner (Joshua Greer Jr vs Giovanni Escaner), Nikolai Potapov (via majority decision, Joshua Greer Jr vs Nikolai Potapov) and Antonio Nieves in 2019 (Joshua Greer Jr vs Antonio Nieves).
His opponent, Mike Plania, has an official record of 23-1-0 (12 knockouts) and he entered as the No.51 super bantamweight. He lost to Juan Carlos Payano in 2018 (Juan Carlos Payano vs Mike Plania) but then he has won eight fights defeating Matias Agustin Arriagada, Julio Buitrago and Giovanni Gutierrez in his last three. Greer vs Plania is the main event of the evening. Watch the video and rate this fight! 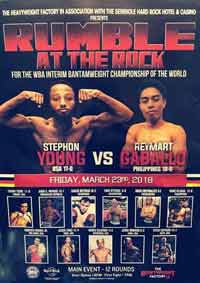 Review by AllTheBestFights.com: 2018-03-23, fight not particularly good between Juan Payano and Mike Plania: it gets two stars.

The former Wba Bw champion Juan Carlos Payano entered this fight with a boxing record of 19-1-0 (9 knockouts) and he is ranked as the No.9 bantamweight in the world (currently the #1 in this division is Jamie McDonnell). He suffered his only loss in the rematch with Rau’shee Warren in 2016 (via majority decision, Payano vs Warren 2), after this bout he has beat Isao Gonzalo Carranza and Alexis Santiago (Juan Carlos Payano vs Alexis Santiago).
His opponent, the undefeated Mike Plania, has a perfect record of 14-0-0 (7 knockouts) but he is not ranked as he hasn’t fought since February 26, 2017 when he defeated Jetly Purisima. Payano vs Plania is valid for the vacant WBA-NABA super bantamweight title; undercard of Stephon Young vs Reymart Gaballo. Watch the video and rate this fight!