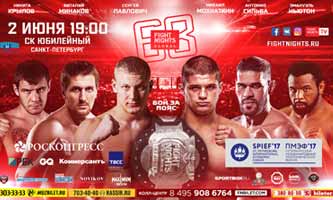 Review by AllTheBestFights.com: 2017-06-02, boring fight between Sergey Pavlovich and Mikhail Mokhnatkin: it gets one star!

The undefeated Sergey Pavlovich entered this fight with a perfect record of 10-0-0 (80% ko/tko victory rate – he has never won via submission) and he is ranked as the No.33 heavyweight in the world. He fought four times last year winning over Magomedbag Agaev, Chaban Ka, Akhmedshaikh Gelegaev and Alexei Kudin.
His opponent, Mikhail Mokhnatkin, has an official record of 9-1-2 (78% finishing rate) and he entered as the No.55 in the same weight class. He suffered his only loss when he faced Murad Chachanov at his pro mma debut in 2010; he fought twice in 2016 drawing with Alexei Kudin and beating Fabio Maldonado. Sergey Pavlovich vs Mikhail Mokhnatkin is the main event of Fight Nights 68 – FNG 68. Watch the video and rate this fight!