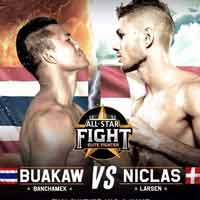 END_OF_DOCUMENT_TOKEN_TO_BE_REPLACED

Review by AllTheBestFights.com: 2017-04-29, pretty good fight between Yodkhunpon Sitmonchai and Niclas Larsen: it gets three stars.

Yodkhunpon Sitmonchai entered this fight with a pro kickboxing record of 83-22-1 (51 knockouts) and he is ranked as the No.6 super welterweight in the world while his opponent, Niclas Larsen, has a record of 45-8-2 (24 knockouts) and he entered as the No.11 in the same weight class. Yodkhunpon Sitmonchai vs Niclas Larsen is on the undercard of Jason Wilnis vs Simon Marcus 3 – Glory 40. Watch the video and rate this fight!