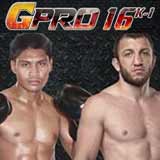 Review: 2011-12-03, pleasant fight between John Wayne Parr and Nonsai Sor Sanyakorn but it is not enough for our three stars (on the original fight card JWP was expected to face Frankie Giorgi). John Wayne Parr, ranked as the No.2 middleweight in the world, entered the fight with a record of 79-31-1, while Nonsai Sor Sanyakorn had a record of 65-30-0. JWP vs Nonsai is the main event of “Showdown Evolution 25”. Watch the video!