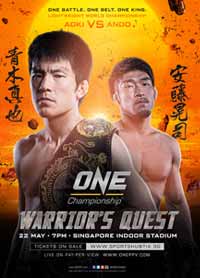 Roy Doliguez entered this fight with a pro mma record of 6-1-0 (33% submission victory rate – he has never won by ko/tko) and he is ranked as the No.10 strawweight in the world. He suffered his only defeat in 2012 when he faced Dennis Salazar, since then he has won four bouts taking revenge on Salazar in his last fight.
His opponent, the 3 times Lumpinee Muay Thai World Champion Dejdamrong Sor Amnuaysirichoke, has a mma record of 4-0-0 (100% finishing rate) but he has an outstanding kickboxing record of 282-65. Doliguez vs Amnuaysirichoke is valid for the inaugural ONE FC strawweight title; undercard of Shinya Aoki vs Koji Ando – ONE FC 27. Watch the video and rate this fight! 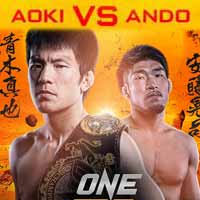 Review by AllTheBestFights.com: 2015-05-22, boring fight between Shinya Aoki and Koji Ando: it gets one star!

The black belt in Brazilian jiu-jitsu and judo Shinya Aoki entered this fight with a professional mma record of 37-6-0 (71% finishing rate) and he is ranked as the No.25 lightweight in the world. He suffered his last defeat in 2012 when he faced Eddie Alvarez at Bellator 66 (=Alvarez vs Aoki 2), since then he has collected seven consecutive victories winning the One Fc Lw belt against Kotetsu Boku in 2013 (=Aoki vs Boku) and beating Yuki Yamamoto in his last bout (=Aoki vs Yamamoto).
His opponent, Koji Ando, has an official record of 11-3-2 (73% finishing rate) and he entered as the No.40 in the same weight class. Ando’s last defeat occurred in 2011, against Guan Wang (via split decision), but after this bout he has won five bouts defeating Rafael Nunes and Zorobabel Moreira in 2014. Aoki vs Ando, main event of One Championship 27, is valid for the ONE FC lightweight title (Aoki’s second defense). Watch the video and rate this fight!