Home » ONE No Surrender 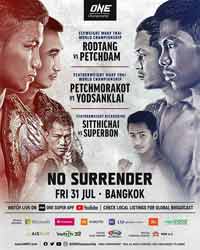 Review by AllTheBestFights.com: 2020-07-31, pretty good fight between Sitthichai Sitsongpeenong and Superbon Banchamek 3: it gets three stars.
The former Lumpinee, Kunlun, WLF and Glory world champion Sitthichai Sitsongpeenong entered this fight with a kickboxing record of 124-31-5 (39 knockouts) and he is ranked as the No.5 super welterweight in the world. He fought twice last year losing to Marat Grigorian (Sitthichai Sitsongpeenong vs Marat Grigorian 5) and beating Boburjon Tagayev.
His opponent, the former Kunlun Fight champion Superbon Banchamek, has an official record of 110-34-0 (26 knockouts) and he entered as the No.4 in the same weight class. He also lost to Marat Grigorian, in 2018, but since then he has won nine consecutive bouts defeating Wilson Varela in his last one. In their previous fights Sitthichai beat Superbon in January 2016 but then he lost the rematch in September of the same year; this third bout is on the undercard of Rodtang Jitmuangnon vs Petchdam Petchyindee 3 – ONE No Surrender. Watch the video and rate this fight!

Review by AllTheBestFights.com: 2020-07-31, nice and tough exchanges between Rodtang Jitmuangnon and Petchdam Petchyindee 3: it gets three stars.
The former Omnoi Stadium and current ONE Muay Thai Flw champion Rodtang Jitmuangnon entered this fight with a professional kickboxing record of 262-42-10 and he is ranked as the No.6 lightweight in the world but he comes off the loss against Kaonar P.K.SaenchaiMuaythaiGym; before this bout, in 2020, he had beat Yodlekpet Or. Pitisak and Jonathan Haggerty in their rematch (Rodtang Jitmuangnon vs Jonathan Haggerty 2).
His opponent, the former Lumpinee, Toyota Marathon, WBC and ONE world champ Petchdam Petchyindee Academy (also known as Petchdam Gaiyanghadao), has an official record of 96-16-7, he lost the rematch with Ilias Ennahachi last year but then he has won over Michael Garraffo and Kohei “Momotaro” Kodera. In their previous bouts Rodtang beat Petchdam in 2017 but then he lost the rematch in 2018; this third fight, main event of “ONE No Surrender”, is valid for the ONE Muay Thai flyweight title. Watch the video and rate this fight!
FOLLOW US ON