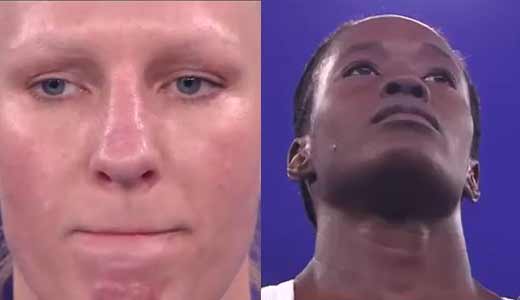 Review by AllTheBestFights.com: 2015-02-27, tremendous pace and very tough exchanges: Anne Sophie Mathis vs Oxandia Castillo was an awesome bout, one of the best boxing fights of 2015; it gets four stars but if we don’t find anything better this could be the 2015 female Fight of the Year!

The former Wba, Wbc, Ibf super lightweight and Ibf, Iba, Wbf welterweight champion Anne Sophie Mathis entered this fight with a professional boxing record of 27-3-1 (23 KOs=85%) and she is ranked as the No.1 women’s super welterweight in the world but she won just one out of his last four fights. In fact she suffered two consecutive defeats in 2012, against Holly Holm (in their rematch – Mathis won the first bout) and against Cecilia Braekhus (=Braekhus vs Mathis), then she won the vacant Wbf super-Ww title with Yahaira Hernandez in 2013 and her last bout, against Christina Hammer, ended in a no-contest.
Her opponent, the 20-year-old (17 years younger than Mathis) former Wbo super-Ww champion Oxandia Castillo, has an official record of 13-2-2 (10 KOs=77%) and she entered as the No.4 in the same weight class; she lost twice between 2013 and 2014, against Cecilia Braekhus (=Braekhus vs Castillo) and Noni Tenge, but then ‘La Loba’ Castillo came back to win beating Yoseidy Zarzuela. Mathis vs Castillo is valid for the WBF female super welterweight title (Mathis’ first defense). Watch the video and rate this fight! 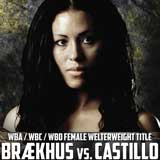 Review: 2013-09-07, some good exchanges between Cecilia Braekhus and Oxandia Castillo but it is not enough to get three stars. Both undefeated, the Norwegian Cecilia Braekhus (22-0-0, 6 KOs) entered as the No.1 women’s welterweight in the world while Oxandia Castillo (12-0-2, 9 KOs) entered as the No.3. Braekhus vs Castillo is valid for the WBC, WBA, WBO female welterweight titles; undercard of Patrick Nielsen vs Patrick Majewski. Watch the video!