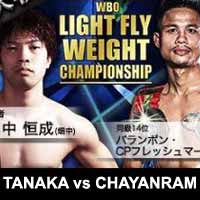 Review by AllTheBestFights.com: 2017-09-13, great performance by both boxers: Kosei Tanaka vs Rangsan Chayanram gets three stars.

The undefeated world champion in two different weight classes Kosei Tanaka entered this fight with a perfect boxing record of 9-0-0 (5 knockouts) and he is ranked as the No.1 light flyweight in the world. Between 2016 and 2017 he has won over Rene Patilano (=Tanaka vs Patilano), Moises Fuentes (=Fuentes vs Tanaka) and Angel Acosta (=Tanaka vs Acosta).
His opponent, Palangpol CP Freshmart (also known as Rangsan Chayanram), has an official record of 14-1-0 (8 knockouts) and he entered as the No.23 in the same weight class. He suffered his only loss at his first professional bout in 2011, against Koji Itagaki, since then he has collected 14 consecutive victories beating Noppadol Chornkratok and Samuel Tehuayo in 2017. Kosei Tanaka vs Palangpol CP Freshmart is valid for the WBO World Light Flyweight title (Tanaka’s second defense). Watch the video and rate this fight!