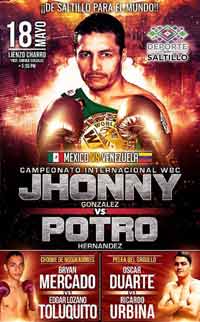 Review by AllTheBestFights.com: 2019-05-18, disappointing fight between Jhonny Gonzalez and Rafael Hernandez: it gets two stars.

The former world champion in two different weight classes Jhonny Gonzalez entered this fight with a professional record of 66-11-0 (54 KOs=82%) and he is ranked as the No.23 super featherweight in the world. He fought twice last year beating Marlyn Cabrera (Jhonny Gonzalez vs Marlyn Cabrera) and losing to Tomas Rojas (Jhonny Gonzalez vs Tomas Rojas).
His opponent, Rafael Hernandez, has a boxing record of 30-11-3 (24 KOs=80%) and he entered as the No.134 featherweight. ‘El Potro’ Hernandez was defeated by Zoltan Kovacs last year but then he has tied with Jose Luis Graterol and has beat Luis Martinez and Richard Sabino. Gonzalez vs Hernandez is valid for the vacant WBC FECARBOX Silver lightweight title. Watch the video and rate this fight! 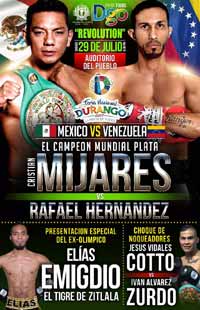 Review by AllTheBestFights.com: 2017-07-29, fight not particularly good between Cristian Mijares and Rafael Hernandez: it gets two stars.

The former Wbc, Wba and Ibf champion Cristian Mijares entered this fight with a professional record of 56-8-2 (26 knockouts) and he is ranked as the No.13 featherweight in the world. ‘El Diamante’ Mijares suffered his last defeat when he faced Leo Santa Cruz in 2014 (=Santa Cruz vs Mijares), since then he has won seven bouts beating Tomas Rojas in 2017 (=Mijares vs Rojas 2).
His opponent, Rafael Hernandez, has a boxing record of 21-7-2 (16 knockouts) but he lost two out of his last four bouts, against Ricardo Nunez and Nikita Kuznetsov. Cristian Mijares vs Rafael Hernandez is the main event of the evening. Watch the video and rate this fight!