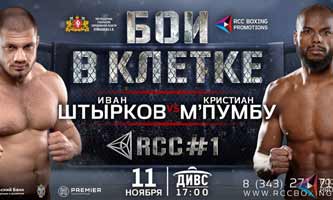 Review by AllTheBestFights.com: 2017-11-11, disappointing fight between Ivan Shtyrkov and Christian M’Pumbu: it gets two stars.

The undefeated Ivan Shtyrkov entered this fight with a perfect record of 11-0-0 (82% finishing rate) and he is ranked as the No.21 heavyweight in the world. ‘Ural Hulk’ Shtyrkov has already fought three times in 2017 winning over Rodney Wallace, Philip De Fries and Satoshi Ishii (=Shtyrkov vs Ishii).
His opponent, the former Bellator light-Hw champion Christian M’Pumbu, has a mma record of 21-8-1 (81% finishing rate) and he entered as the No.99 in the same weight class. He lost to Denis Stojnic in 2016 but then he has beat Sebastien Huot-Marchand and Sergio Souza. Shtyrkov vs M’Pumbu is the main event of RCC 1. Watch the video and rate this fight!