Review by AllTheBestFights.com: 2015-08-01, fight not so exciting between Chris Avalos and Rey Perez: it gets two stars.

Chris Avalos entered this fight with a boxing record of 25-3-0 (19 knockouts) and he is ranked as the No.6 super bantamweight in the world while his opponent, Rey Perez, has an official record of 20-6-0 (5 knockouts). Both boxers have fought once in 2015: Avalos has lost to #1 Carl Frampton (=Frampton vs Avalos) while Perez has won over Jovill Marayan. Avalos vs Perez is the main event of the evening. Watch the video and rate this fight!

END_OF_DOCUMENT_TOKEN_TO_BE_REPLACED 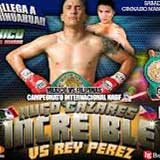 Review: 2013-01-26, some good exchanges between Hugo Fidel Cazares and Rey Perez but it is not enough to get three stars. Hugo Fidel Cazares (37-7-2) entered as the No.13 super bantamweight in the world while Rey Perez (17-2-0) entered as the No.23. Cazares vs Perez is valid for the vacant WBC International Silver super bantamweight title. Watch the video!