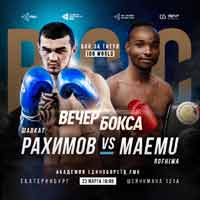 The undefeated Ibo super-Fw champion Shavkatdzhon Rakhimov entered this fight with a perfect boxing record of 13-0-0 (10 KOs=77%) and he is ranked as the No.3 super featherweight in the world (currently the #1 in this division is Miguel Berchelt). In his last three bouts he has won over Emanuel Lopez, Malcolm Klassen (Shavkatdzhon Rakhimov vs Malcolm Klassen) and Robinson Castellanos (Shavkatdzhon Rakhimov vs Robinson Castellanos).
His opponent, Rofhiwa Maemu, has an official record of 18-7-2 (12 knockouts) and he entered as the No.25 in the same weight class. He lost to Azinga Fuzile in 2017 but then he has won six fights defeating Humvhulani Netshamutshedzi in his last one. Rakhimov vs Maemu is valid for the IBO World super featherweight title (Rakhimov’s third defense). Watch the video and rate this fight!