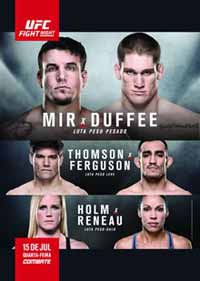 Review by AllTheBestFights.com: 2015-07-15, great performance by both fighters: Manny Gamburyan vs Scott Jorgensen gets three stars.

The black belt in judo and karate Manny Gamburyan entered this fight with a professional mma record of 14-8-0 (64% finishing rate) and he is ranked as the No.10 bantamweight in the world (currently the #1 in this division is TJ Dillashaw). He fought twice last year losing to Nik Lentz and winning over Cody Gibson.
His opponent, Scott Jorgensen, has a record of 15-10-0 (47% finishing rate) and he entered as the No.28 flyweight but he won just one out of his last five bouts, against Danny Martinez; after this fight he was defeated by Wilson Reis. Gamburyan vs Jorgensen is on the undercard of Frank Mir vs Todd Duffee – UFC Fight Night 71. Watch the video and rate this fight! 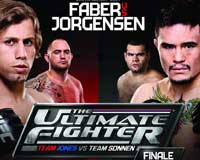 Review: 2012-12-08, amazing work on the ground and spectacular finish: Scott Jorgensen vs John Albert is close to get four stars (UFC Submission and Fight of the Night). The Bjj purple belt Scott Jorgensen ranked as the No.24 bantamweight in the world, entered the fight with a record of 13-6-0 while John Albert had a record of 7-3-0. Jorgensen vs Albert is on the undercard of Benson Henderson vs Nate Diaz – UFC on Fox 5. Watch the video!