Review: 2014-05-17, fight not particularly exciting between Nathan Cleverly and Sean Corbin: it gets two stars. Nathan Cleverly entered this fight with a pro boxing record of 26-1-0 (12 knockouts) and he is ranked as the No.19 light heavyweight in the world, he suffered his only defeat in his last bout against the undefeated #3 light heavyweight Sergey Kovalev losing also the WBO light-Hw title (Cleverly vs Kovalev).
His opponent, Sean Corbin, has a record of 17-4-0 (12 knockouts), he is 39 years old (12 years older than Cleverly) and his only notable victory was against former Wbc Cw champion Wayne Braithwaite in 2012 so he should be an easy opponent for the Englishman. Cleverly vs Corbin is valid for the vacant WBA Inter-Continental cruiserweight title (Cleverly’s debut in this division); undercard of Lee Selby vs Romulo Koasicha. Watch the video and rate this fight!

END_OF_DOCUMENT_TOKEN_TO_BE_REPLACED 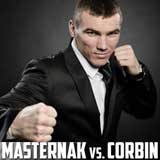 Review: 2013-04-13, pretty boring fight with two knockdowns: Mateusz Masternak vs Sean Corbin gets two stars. The undefeated Mateusz Masternak (29-0-0, 21 KOs) entered as the No.9 cruiserweight in the world while Sean Corbin (15-3-0, 10 KOs) entered as the No.87. Masternak vs Corbin is valid for the vacant WBC International silver cruiserweight title. Watch the video!