Review by AllTheBestFights.com: 2015-03-21, some good shots between Amanda Nunes and Shayna Baszler but it is not enough to get three stars: it gets two.

The black belt in Brazilian jiu-jitsu Amanda Nunes entered this fight with a professional mma record of 9-4-0 (100% finishing rate) and she is ranked as the No.20 women’s bantamweight in the world. She fought just once in 2014 losing to Cat Zingano (=Zingano vs Nunes).
Her opponent, Shayna Baszler, has an official record of 15-9-0 (93% submission victory rate – she has never won via ko/tko) but she won just one out of his last four bouts, against Sarah D’Alelio in 2012. After this bout she was defeated by Alexis Davis (=Baszler vs Davis 2) and Bethe Correia (=Correia vs Baszler). Nunes vs Baszler is on the undercard of Demian Maia vs Ryan LaFlare – UFC Fight Night 62. Watch the video and rate this fight!

END_OF_DOCUMENT_TOKEN_TO_BE_REPLACED

Review: 2014-08-30, Bethe Correia vs Shayna Baszler gets three stars thanks to a great finish. The undefeated Bethe Correia entered this fight with a mma record of 8-0-0 (13% ko/tko victory rate – she has never won by submission) and she is ranked as the No.16 women’s bantamweight in the world while her opponent, Shayna Baszler, has an official record of 15-8-0 (93% submission victory rate – she has never won by ko/tko) and she entered as the No.19 in the same weight class. Correia vs Baszler is on the undercard of TJ Dillashaw vs Joe Soto – UFC 177. Watch the video and rate this fight!

END_OF_DOCUMENT_TOKEN_TO_BE_REPLACED

Review: 2013-01-05, pretty good fight with a great finish: Shayna Baszler vs Alexis Davis 2 gets three stars. Shayna Baszler (15-7-0) entered as the No.7 bantamweight in the world while Alexis Davis (12-5-0) entered as the No.4. In their first fight Baszler defeated Davis by unanimous decision (March 27, 2010); this second fight is on the undercard of Carla Esparza vs Bec Hyatt – Invicta FC 4. Watch the video!

END_OF_DOCUMENT_TOKEN_TO_BE_REPLACED 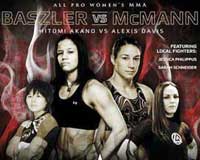 Review: 2012-07-28, good pace and great second round: Shayna Baszler vs Sara Mcmann gets three stars. The undefeated Sara Mcmann ranked as the No.5 bantamweight in the world, entered the fight with a record of 5-0-0 while Shayna Baszler had a record of 14-6-0 (Baszler is not ranked as he hasn’t fought since November 19, 2010 when she defeated Elaina Maxwell). Baszler vs Mcmann is the main event of Invicta FC 2. Watch the video!