Review by AllTheBestFights.com: 2017-04-23, fight not particularly good between Marlon Tapales and Shohei Omori 2: it gets two stars.

The Wbo Bw champion Marlon Tapales entered this fight with a pro record of 29-2-0 (12 knockouts) and he is ranked as the No.3 super bantamweight in the world (currently the #1 in this division is Guillermo Rigondeaux). He suffered his last loss when he faced David Sanchez in 2013, since then he has won eight consecutive bouts beating Pungluang Sor Singyu in 2016 (=Sor Singyu vs Tapales).
His opponent, Shohei Omori, has a boxing record of 18-1-0 (13 knockouts) and he entered as the No.11 bantamweight. He lost to Tapales in their first fight in 2015 (=Omori vs Tapales I) but then he has won over Espinos Sabu, Edgar Jimenez and Rocky Fuentes. Marlon Tapales vs Shohei Omori 2 was valid for the WBO World bantamweight title but Tapales fails to make weight so the belt only at stake for the Japanese; undercard of Kazuto Ioka vs Noknoi Sitthiprasert. Watch the video and rate this fight!

END_OF_DOCUMENT_TOKEN_TO_BE_REPLACED 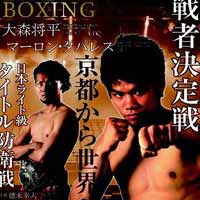 Review by AllTheBestFights.com: 2015-12-16, pretty good fight between Shohei Omori and Marlon Tapales: it gets three stars.

The undefeated Shohei Omori entered this fight with a perfect boxing record of 15-0-0 (10 knockouts) and he is ranked as the No.4 bantamweight in the world (currently the #1 in this division is Shinsuke Yamanaka). He has already fought twice in 2015 beating Kentaro Masuda and Hirofumi Mukai.
His opponent, Marlon Tapales, has an official record of 28-2-0 (11 knockouts) and he entered as the No.13 in the same weight class. He suffered his last loss in 2013 when he faced David Sanchez, since then he has won six consecutive bouts. Omori vs Tapales, WBO bantamweight title eliminator, is the main event of the evening. Watch the video and rate this fight!