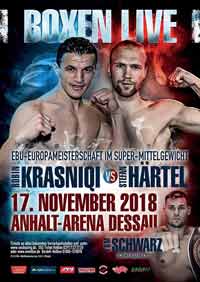 Review by AllTheBestFights.com: 2019-05-11, great performance by both boxers: Robin Krasniqi vs Stefan Haertel is very close to get four stars!

Robin Krasniqi entered this fight with a boxing record of 49-5-0 (17 knockouts) and he is ranked as the No.15 super middleweight in the world. He lost to Arthur Abraham in 2017 (Arthur Abraham vs Robin Krasniqi) but then he has won over Bartlomiej Grafka, Stanislav Kashtanov (Robin Krasniqi vs Stanislav Kashtanov) and Ronny Landaeta (Robin Krasniqi vs Ronny Landaeta).
His opponent, the former Olympian Stefan Haertel, has an official record of 17-1-0 (2 knockouts) and he entered as the No.57 in the same weight class. He suffered his only loss last year, against Adam Deines, after this bout he has beat Dominik Landgraf and Emmanuel Feuzeu. Krasniqi vs Hartel is valid for the EBU European super middleweight title. Watch the video and rate this fight!