Review by AllTheBestFights.com: 2015-02-28, spectacular finish between Josh Koscheck and Jake Ellenberger: it is very close to get four stars (UFC Performance of the Night).

Josh Koscheck entered this fight with a mma record of 17-8-0 (59% finishing rate) but he is not ranked as he hasn’t fought since November 16, 2013 when he was defeated by Tyron Woodley (=Koscheck vs Woodley), before this bout he had already lost twice: against Robbie Lawler in February 2013 (=Koscheck vs Lawler) and against Johny Hendricks in 2012 (=Koscheck vs Hendricks).
His opponent, Jake Ellenberger, has a record of 29-9-0 (79% finishing rate) and he entered as the No.19 welterweight in the world but he lost his last three bouts as well: he was defeated by Rory MacDonald (=Ellenberger vs MacDonald), Robbie Lawler (=Lawler vs Ellenberger) and Kelvin Gastelum (=Ellenberger vs Gastelum). Koscheck vs Ellenberger is on the undercard of Ronda Rousey vs Cat Zingano – UFC 184. Watch the video and rate this fight!

END_OF_DOCUMENT_TOKEN_TO_BE_REPLACED 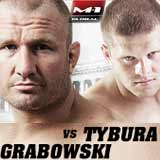 Review: 2014-08-15, pretty good finish between Damian Grabowski and Marcin Tybura: it gets three stars. Damian Grabowski entered this fight with a professional mma record of 19-1-0 (84% finishing rate) and he is ranked as the No.12 heavyweight in the world (currently the #1 in this division is Cain Velasquez), he suffered his only defeat in 2010 when he faced Cole Konrad in the semifinal of the Bellator (season 3) Hw tournament; since then he has collected six consecutive victories winning the M-1 Hw belt in his last bout, against Kenny Garner (=Garner vs Grabowski).
His opponent, the undefeated Marcin Tybura, has a perfect record of 10-0-0 (80% finishing rate) and he entered as the No.23 in the same weight class, he has already fought once in 2014 beating Maro Perak in the final of the M1 Grand prix Hw tournament (=Tybura vs Perak). Grabowski vs Tybura, main event of M-1 Challenge 50, is valid for the M-1 Challenge heavyweight title (Grabowski’s first defense). Watch the video and rate this fight!

END_OF_DOCUMENT_TOKEN_TO_BE_REPLACED

Review: 2014-04-11, pretty good second part of the fight but it is not enough to get three stars: Vladimir Matyushenko vs Joey Beltran gets two. Vladimir Matyushenko entered this fight with a mma record of 27-7-0 (59% finishing rate) and he is ranked as the No.29 light heavyweight in the world, he fought twice last year losing against Ryan Bader (his last Ufc bout Bader vs Matyushenko) and then he made his Bellator debut defeating Houston Alexander (=Matyushenko vs Alexander).
His opponent, Joey Beltran, has an official record of 14-10-0 (86% finishing rate) and he entered as the No.65 in the same weight class, he comes off three defeats and one no-contest in the last two years. Matyushenko vs Beltran is on the undercard of Lavar Johnson vs Blagoi Ivanov and it should be Matyushenko’s retirement fight (he is 43 years old). Watch the video and rate this fight!

END_OF_DOCUMENT_TOKEN_TO_BE_REPLACED 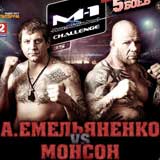 END_OF_DOCUMENT_TOKEN_TO_BE_REPLACED

Review: 2012-06-21, even with the submission in the first round, the fight between Jeff Monson and Denis Komkin has not been particularly spectacular: two stars. Jeff Monson ranked as the No.33 heavyweight in the world, entered the fight with a record of 45-13-1 while Denis Komkin had a record of 13-8-0. Monson vs Komkin is on the undercard of Fedor Emelianenko vs Pedro Rizzo (M-1 Global). Watch the video!