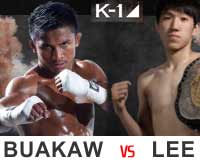 Review: 2014-02-23, good performance by both fighters with some nice and explosive kicks: Buakaw Banchamek vs Sung-Hyun Lee gets three stars. Buakaw Banchamek, formerly known as Buakaw Por Pramuk, entered this fight with a professional kickboxing record of 213-21-12 (55 knockouts) and he is ranked as the No.2 super welterweight in the world, the last fighter who stopped him was Andy Souwer at the semifinal of K-1 World MAX 2009, so he comes off 25 consecutive wins!
His opponent, Sung-Hyun Lee, has an official record of 47-7-1 (15 knockouts), he is 23 years old (8 years younger than Buakaw) and last year he fought seven times losing twice (against Yoshihiro Sato and Yasuomi Soda) but then he managed to win the k-1 final 16 and final 8 beating Charles Francois (=Lee vs Francois) and Elam Ngor (=Ngor vs Lee). Buakaw vs Lee is the semifinal of the K-1 World MAX. Watch the video and rate this fight!

Review: 2014-01-11, fight not particularly exciting between Elam Ngor and Sung-Hyun Lee: it gets two stars. Elam Ngor entered the fight with a record of 22-6-1 while Sung-Hyun Lee, or Sung Hyung Lee, had a record of 46-7-1. Ngor vs Lee is the quarterfinal of K-1 MAX world championship tournament; undercard of Enriko Kehl vs Maximo Suarez. Watch the video!