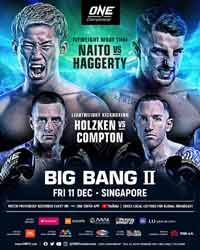 Review by AllTheBestFights.com: 2020-12-11, good fight between Taiki Naito and Jonathan Haggerty: it gets three starse (take a look at our ranking of the best kickboxing fights of 2020).
Taiki Naito entered this fight with a professional kickboxing record of 32-8-0 (11 knockouts) and he is ranked as the No.12 lightweight in the world. He lost two consecutive bouts between 2018 and 2019, against Tenshin Nasukawa and Hiroki Kasahara, but then he has won four fights defeating Savvas Michael in 2020.
His opponent, the former Iska, Wbc and ONE world champion Jonathan Haggerty, has an official record of 16-4-0 (10 knockouts) and he entered as the No.11 in the same weight class but he comes off two consecutive losses, both against Rodtang Jitmuangnon (Rodtang Jitmuangnon vs Jonathan Haggerty 2); before these two fights, in 2019, he had beat Joseph Lasiri in January and Sam-A Gaiyanghadao in May. Haggerty vs Naito is the main event of the ONE Championship: Big Bang 2. Watch the video and rate this fight!