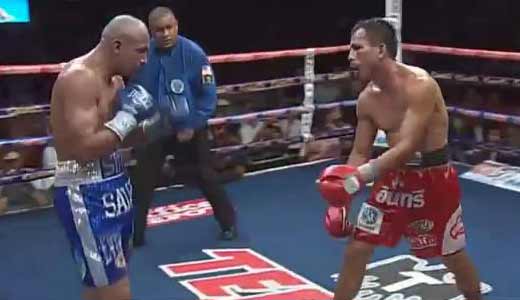 Review: 2014-09-20, back and forth battle with seven knockdowns and some tough exchanges: Orlando Salido vs Terdsak Kokietgym is one of the best boxing fights of 2014 and it gets four stars (we had rated this fight three stars but after watching it again we have changed our rating – September 22, 2014 – in the comments you can see how we rate it round by round). Orlando Salido entered this fight with a professional boxing record of 41-12-2 (28 knockouts) and he is ranked as the No.7 super featherweight in the world, he suffered his last defeat in 2013 when he faced #1 Mikey Garcia (=Salido vs Garcia), after that bout he came back to win beating Orlando Cruz (=Salido vs Cruz) and Vasyl Lomachenko (=Salido vs Lomachenko).
His opponent, Terdsak Kokietgym, has an official record of 53-4-1 (33 knockouts) and he entered as the No.42 in the same weight class, he suffered his last loss in 2012 when he faced Takahiro Ao in a bout valid for the WBC super-Fw belt, since then he has collected seven consecutive wins. ‘Siri’ Salido vs Kokietgym is valid for the interim WBO World super featherweight title. Watch the video and rate this fight!