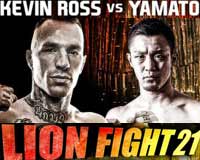 END_OF_DOCUMENT_TOKEN_TO_BE_REPLACED

Review: 2011-12-09, nice fight with an unexpected knockdown at the end of the third round, the fight between Tetsuya Yamato and Ryuji Kajiwara (red trunks) is very close to our 4 stars. Tetsuya Yamato, ranked as the No.19 super lightweight in the world, entered the fight with a record of 25-8-1 while Ryuji Kajiwara had a record of 20-10-1. Yamato vs Kajiwara is valid for the Krush -63kg title (Krush 14). Watch the video!