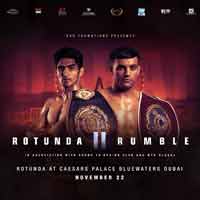 Review by AllTheBestFights.com: 2019-11-22, fight not so exciting between Jack Catterall and Timo Schwarzkopf: it gets two stars.

END_OF_DOCUMENT_TOKEN_TO_BE_REPLACED

The former Ibo Ww champion Chris van Heerden entered this fight with a pro boxing record of 25-2-1 (12 knockouts) but he is not ranked as he hasn’t fought since October 22, 2016 when he defeated Sacky Shikukutu. Before this bout he had also won over Steve Claggett but in 2015 he had lost to Errol Spence Jr (Errol Spence Jr vs Chris van Heerden).
His opponent, Timo Schwarzkopf, has a record of 18-1-0 (10 knockouts) and he entered as the No.36 super lightweight in the world. He suffered his only loss when he faced Anthony Yigit in 2015, since then he has won four bouts beating Artem Haroyan and Massimiliano Ballisai in 2017. Heerden vs Schwarzkopf is the quarterfinal of ‘The Jose Sulaiman World Invitational Tournament’; undercard of Felix Diaz vs Francisco Santana. Watch the video and rate this fight!