Review: 2014-12-20, the fight between Pornsanae Sitmonchai and Denis Puric gets three stars thanks to a good finish. The former Rajadamnern Stadium super flyweight champion Pornsanae Sitmonchai entered this fight with a professional kickboxing record of 147-48-1 (or 111-57-1, wikipedia’s record) while his opponent, Denis Puric, has an official record of 7-5-0 (5-3-0 in mma). Pornsanae has already fought ten times in 2014 but he won just three bouts (but one is one of the best muay thai fights of the year: Pornsanae vs Manawwhan); in his last fight he lost to Hiroaki Suzuki (=Suzuki vs Pornsanae). Pornsanae vs Puric is on the undercard of Buakaw Banchamek vs Dmytro Konstantynov – TopKing TK3 Hong Kong. Watch the video and rate this fight! 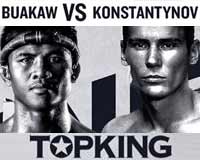 Review: 2014-12-20, fight not particularly good between Buakaw Banchamek and Dmytro Konstantynov: it gets two stars. Buakaw Banchamek, formerly known as Buakaw Por Pramuk, entered this fight with a professional kickboxing record of 220-22-12 (58 knockouts – or 256-41-12 on wikipedia) and he is ranked as the No.4 super welterweight in the world while his opponent, Dmytro Konstantynov, has an official record of 9-6-0. Buakaw has already fought eight times in 2014 winning the Wbc muay thai diamond world title in August defeating Abdoul Toure (=Buakaw vs Toure 2) but then he lost the final of the K-1 World MAX 2014 against Enriko Kehl (controversial ending… Buakaw vs Kehl 2). After this bout he came back to win beating Steve Moxon (=Buakaw vs Moxon). Buakaw vs Konstantynov is the quarterfinal of the TopKing World Series 70kg tournament. Watch the video and rate this fight!