Review: 2012-09-22, nice fourth round but the rest of the fight is not particularly exciting: Joseph Benavidez vs Demetrious Johnson gets two stars. Joseph Benavidez (16-2-0) entered as the No.1 flyweight in the world while Demetrious Johnson (15-2-1) entered as the No.2. Benavidez vs Johnson is valid for the UFC Flyweight title, they also faced each other a second time on December 14, 2013 (=Johnson vs Benavidez 2); undercard of Jon Jones vs Vitor Belfort – UFC 152. Watch the video! 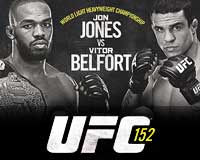 Review: 2012-09-22, exciting first round and great fourth period: the fight Jon Jones vs Vitor Belfort (UFC Submission of the Night) gets three stars. Jon Jones (16-1-0) entered as the No.1 light heavyweight in the world while Vitor Belfort (21-9-0) entered as the No.5 middleweight. Jones vs Belfort is valid for the UFC Light Heavyweight title (Jones’ fourth defense) UFC 152. Watch the video!


The light heavyweight championship will be the main event at the UFC 152 tonight 22 September (Toronto, Air Canada Center).
At the weigh-in of yesterday the champion Jon “Bones” Jones was booed loudly from the fans. They didn’t seem to have forgiven him for the cancellation of UFC 151, when he decided not to face Chael Sonnen on eight days’ notice.
Despite the fans, Jones kept smiling defiantly and his “brand-new” beard was perfect to concealing him.
On the other hand the challenger Vitor Belfort was cheered and greeted and his name was acclaimed when he stepped on the scale.
“I worked very hard for this fight and
FOLLOW US ON