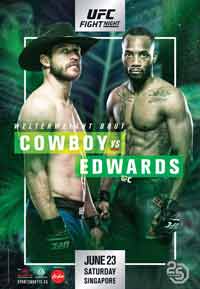 Review by AllTheBestFights.com: 2018-06-23, good finsih between Ovince Saint Preux and Tyson Pedro: it get three stars.

Ovince Saint Preux entered this fight with a pro mma record of 22-11-0 (77% finishing rate) and he is ranked as the No.15 light heavyweight in the world but he comes off the loss against Ilir Latifi (Ovince St Preux vs Ilir Latifi); before this bout, in 2017, he had beat Corey Anderson (Ovince St Preux vs Corey Anderson).
His opponent, the black belt in Japanese jiu-jitsu and kempo Tyson Pedro, has a record of 7-1-0 (100% finishing rate) and he entered as the No.33 in the same weight class. He also faced and lost to Ilir Latifi (in 2017, Ilir Latifi vs Tyson Pedro) but then he came back to win in 2018 with Saparbek Safarov (Tyson Pedro vs Saparbek Safarov). OSP St Preux vs Pedro is on the undercard of Donald Cerrone vs Leon Edwards – UFC Fight Night 132. Watch the video and rate this fight! 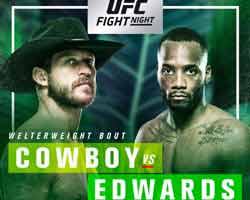 Review by AllTheBestFights.com: 2018-06-23, fight not so exciting between Donald Cerrone and Leon Edwards: it gets two stars.

The black belt in Brazilian jiu-jitsu and gaidojutsu Donald Cerrone entered this fight with a professional mma record of 33-10-0 (76% finishing rate) and he is ranked as the No.12 welterweight in the world but he won just one out of his last four bouts, against Yancy Medeiros in 2018 (Donald Cerrone vs Yancy Medeiros). Before this fight, in 2017, ‘Cowboy’ had lost to Jorge Masvidal (Cerrone vs Masvidal), Robbie Lawler (Lawler vs Cerrone) and Darren Till (Donald Cerrone vs Darren Till).
His opponent, Leon Edwards, has an official record of 15-3-0 (60% finishing rate) and he entered as the No.21 in the same weight class. He lost to Kamaru Usman in 2015 but then he has won five consecutive bouts defeating Bryan Barberena (Leon Edwards vs Bryan Barberena) and Peter Sobotta in his last two (Leon Edwards vs Peter Sobotta). Cerrone vs Edwards is the main event of UFC Fight Night 132. Watch the video and rate this fight!