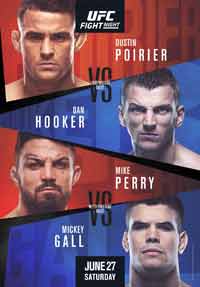 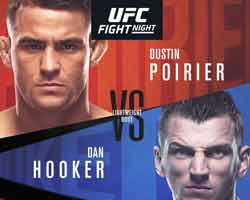 Review by AllTheBestFights.com: 2020-06-27, good fight between Dustin Poirier and Dan Hooker: it gets three stars (UFC Fight of the Night). Moreover this match was ranked in the ‘Top 10 Mma Fights of the Year 2020‘ (ranking generated by our users).
The black belt in Brazilian jiu-jitsu and former interim Ufc Lw champion Dustin Poirier entered this fight with a professional mma record of 25-6-0 (76% finishing rate) and he is ranked as the No.3 lightweight in the world but he comes off the loss against current #1 Lw Ufc champ Khabib Nurmagomedov (Khabib Nurmagomedov vs Dustin Poirier); before this bout he had beat Max Holloway (Max Holloway vs Dustin Poirier 2) and Eddie Alvarez (Eddie Alvarez vs Dustin Poirier 2).
His opponent, Dan Hooker, has an official record of 20-8-0 (85% finishing rate) and he entered as the No.7 in the same weight class. He lost to Edson Barboza in 2018 (Edson Barboza vs Dan Hooker) but then he has beat James Vick (Dan Hooker vs James Vick), Al Iaquinta (Al Iaquinta vs Dan Hooker) and Paul Felder (Paul Felder vs Dan Hooker). Poirier vs Hooker is the main event of UFC on ESPN 12. Watch the video and rate this fight!