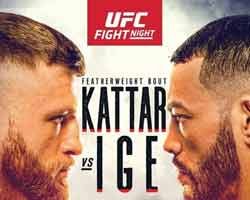 Review by AllTheBestFights.com: 2020-07-16, disappointing fight between Calvin Kattar and Dan Ige: it gets two stars.
Calvin Kattar entered this fight with a professional mma record of 21-4-0 (62% finishing rate) and he is ranked as the No.8 featherweight in the world (currently the #1 in this division is Alexander Volkanovski). He lost to Zabit Magomedsharipov last year (Zabit Magomedsharipov vs Calvin Kattar) but he comes back to win against Jeremy Stephens in 2020 (Jeremy Stephens vs Calvin Kattar).
His opponent, the black belt in Brazilian jiu-jitsu Dan Ige, has an official record of 14-2-0 (57% finishing rate) and he entered as the No.10 in the same weight class. He was defeated by Julio Arce in 2018 but since then he has won six consecutive fights defeating Kevin Aguilar, Mirsad Bektic (Mirsad Bektic vs Dan Ige) and Edson Barboza in his last three (Edson Barboza vs Dan Ige). Kattar vs Ige is the main event of UFC on ESPN 13. Watch the video and rate this fight! 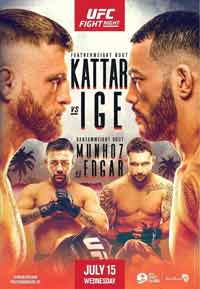 Review by AllTheBestFights.com: 2020-07-16, pretty good fight between Tim Elliott and Ryan Benoit: it gets three stars.
Tim Elliott entered this fight with a pro mma record of 15-11-1 (60% finishing rate) and he is ranked as the No.57 flyweight in the world but he won just one out of his last five bouts, against Mark De La Rosa in 2017; after this fight he has lost to Deiveson Figueiredo (Deiveson Figueiredo vs Tim Elliott), Askar Askarov (Askar Askarov vs Tim Elliott) and Brandon Royval.
His opponent, Ryan Benoit, has a record of 10-6-0 (90% finishing rate) and he entered as the No.70 in the same weight class but he lost two out of his last three fights, against Brandon Moreno in 2016 (Brandon Moreno vs Ryan Benoit) and Alateng Heili in 2019; between these two bouts, in 2017, he beat Ashkan Mokhtarian. Elliott vs Benoit is on the undercard of Calvin Kattar vs Dan Ige – UFC on ESPN 13. Watch the video and rate this fight!