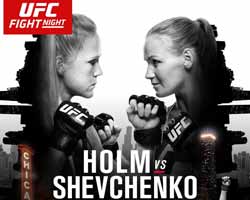 Review by AllTheBestFights.com: 2016-07-23, disappointing fight between Holly Holm and Valentina Shevchenko: it gets two stars.

The former Ufc and Wbc, Wba, Wbf, Iba boxing champion Holly Holm entered this fight with a professional record of 10-1-0 (70% ko/tko victory rate – she has never won via submission) and she is ranked as the No.4 women’s bantamweight in the world. She won the Ufc belt in 2015, against Ronda Rousey (=Rousey vs Holm) but then she lost it at her first defense with Miesha Tate (=Holm vs Tate).
Her opponent, the black belt in tae-kwon-do, judo and former muay thai world champion Valentina Shevchenko, has a mma record of 12-2-0 (75% finishing rate) and she entered as the No.17 in the same weight class but she comes off the loss against #1 Ufc champion Amanda Nunes (=Nunes vs Shevchenko). Holm vs Shevchenko is the main event of the UFC on Fox 20. Watch the video and rate this fight! 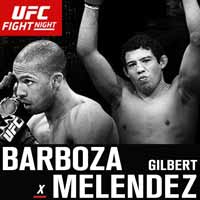 Review by AllTheBestFights.com: 2016-07-23, some good single shots between Edson Barboza and Gilbert Melendez but it is not enough to get three stars: it gets two.

The black belt in tae-kwon-do Edson Barboza entered this fight with a pro record of 17-4-0 (65% finishing rate) and he is ranked as the No.5 lightweight in the world (currently the #1 in this division is Eddie Alvarez). He lost to Tony Ferguson last year (=Ferguson vs Barboza) but he came back to win in 2016 beating Anthony Pettis (=Pettis vs Barboza).
His opponent, the black belt in Bjj and former Strikeforce Lw champion Gilbert Melendez, has an official mma record of 22-5-0 (55% finishing rate) and he entered as the No.11 in the same weight class but he comes off two consecutive losses, against Anthony Pettis in 2014 (=Pettis vs Melendez) and Eddie Alvarez in 2015 (via split decision, Melendez vs Alvarez). Barboza vs Melendez is on the undercard of Holly Holm vs Valentina Shevchenko – UFC on Fox 20. Watch the video and rate this fight!