Review: 2013-05-18, tough fight with some great exchanges and a spectacular finish (UFC Fight of the Night): Lucas Martins vs Jeremy Larsen is close to get four stars. Lucas Martins entered the fight with a record of 12-1-0 (91% finishing rate) while Jeremy Larsen had a record of 8-3-0 (63% finishing rate). Martins vs Larsen is on the undercard of Vitor Belfort vs Luke Rockhold – UFC on FX 8. Watch the video!

END_OF_DOCUMENT_TOKEN_TO_BE_REPLACED 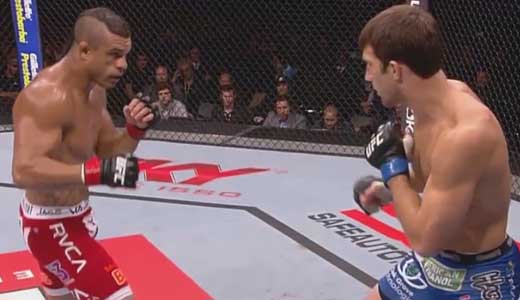 Review: 2013-05-18, two of the best mma fighters in the world and one of the best knockouts of the year (UFC Knockout of the Night): Vitor Belfort vs Luke Rockhold is one of the best mma fights of 2013, four stars! (We had rated this fight as “very close to get four stars” but after watching it again we have changed our rating – June 25, 2013). The Brazilian Vitor Belfort (22-10-0, 82% finishing rate) entered as the No.2 middleweight in the world while the American Luke Rockhold (10-1-0, 80% finishing rate) entered as the No.4; Rockhold’s only loss came in 2007 to Tony Rubalcava via TKO. Belfort vs Rockhold is the main event of UFC on FX 8. Watch the video!

END_OF_DOCUMENT_TOKEN_TO_BE_REPLACED

Review: 2013-05-18, good first round between ‘Jacare’ Souza and Chris Camozzi (UFC Submission of the Night): it gets three stars. Ronaldo ‘Jacare’ Souza (17-3-0, 82% finishing rate) entered as the No.9 middleweight in the world while Chris Camozzi (19-5-0, 58% finishing rate) entered as the No.30 (Camozzi replaces Costas Philippou, who has forced to withdraw from the bout suffering a cut above his eye). Jacare vs Camozzi is on the undercard of Vitor Belfort vs Luke Rockhold – UFC on FX 8; they also faced each other a second time on April 18, 2015 (=Jacare vs Camozzi 2). Watch the video!

END_OF_DOCUMENT_TOKEN_TO_BE_REPLACED

Review: 2013-05-18, some good single shots but the fight between Rafael dos Anjos and Evan Dunham was not particularly exciting: it gets two stars. Rafael dos Anjos (18-6-0) entered as the No.12 lightweight in the world while Evan Dunham (14-3-0) entered as the No.21. Dos Anjos vs Dunham is on the undercard of Vitor Belfort vs Luke Rockhold – UFC on FX 8. Watch the video!