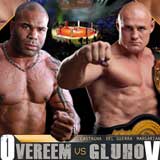 Review: 2013-04-27, good fight and spectacular finish: Konstantin Gluhov vs Valentijn Overeem gets three stars. Konstantin Gluhov ranked as the No.24 heavyweight in the world, entered the fight with a record of 25-12-0 (88% finishing rate) while Valentijn Overeem had a record of 30-28-0 (97% finishing rate). Gluhov vs Overeem is the main event of Pancrase Fighting Championship 5. Watch the video! 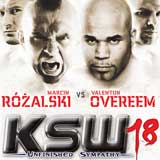 Review: 2011-06-18, sixth consecutive victory for Chad Griggs that defeated Valentijn Overeem, but the fight was not very exciting. (Strikeforce: Overeem vs Werdum). Watch the video!