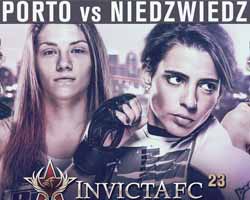 Review by AllTheBestFights.com: 2017-05-20, disappointing fight between Vanessa Porto and Agnieszka Niedzwiedz: it gets two stars.

Vanessa Porto entered this fight with a pro record of 18-7-0 (72% finishing rate) and she is ranked as the No.4 women’s flyweight in the world but she comes off the loss against Jennifer Maia (=Porto vs Maia 2).
Her opponent, the undefeated Agnieszka Niedzwiedz, has a perfect mma record of 9-0-0 (78% finishing rate) and she entered as the No.6 in the same weight class. ‘Kuma’ Niedzwiedz fought twice last year winning over Christine Stanley and Samara Santos Cunha. Agnieszka Niedzwiedz vs Vanessa Porto is the main event of Invicta FC 23. Watch the video and rate this fight!

END_OF_DOCUMENT_TOKEN_TO_BE_REPLACED

Review by AllTheBestFights.com: 2016-03-11, some good exchanges in the second part of the fight but it is not enough to get three stars: Vanessa Porto vs Jennifer Maia 2 gets two stars.

Vanessa Porto entered this fight with a pro mma record of 18-6-0 (72% finishing rate) and she is ranked as the No.1 women’s flyweight in the world. She lost to Barb Honchak in 2013 but then she has won three consecutive fights defeating Roxanne Modafferi in her last bout.
Her opponent, Jennifer Maia, has a record of 12-4-1 (67% finishing rate) and she entered as the No.17 bantamweight but she comes off the loss against DeAnna Bennett. In their first fight Porto beat Maia in two rounds (October 28, 2011; this second fight is valid for the Interim Invicta FC flyweight title – undercard of Ayaka Hamasaki vs Amber Brown – Invicta FC 16. Watch the video and rate this fight!