Review by AllTheBestFights.com: 2022-04-09, mma fight not so exciting: Vinc Pichel vs Mark Madsen gets two stars.
Madsen vs Pichel is on the undercard of Alexander Volkanovski vs Chan Sung Jung – UFC 273. Watch the video and rate this fight! 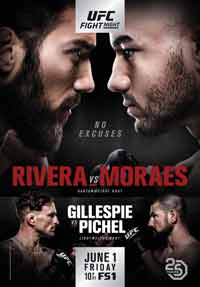 Review by AllTheBestFights.com: 2018-06-01, good fight between Gregor Gillespie and Vinc Pichel: it gets three stars (UFC Performance of the Night).

The undefeated Gregor Gillespie entered this fight with a perfect mma record of 11-0-0 (82% finishing rate) and he is ranked as the No.55 lightweight in the world. In his last three fights he has won over Andrew Holbrook, Jason Gonzalez and Jordan Rinaldi (Gregor Gillespie vs Jordan Rinaldi).
His opponent, Vinc Pichel, has an official record of 11-1-0 (73% ko/tko victory rate – he has never won via submission) and he entered as the No.63 in the same weight class. He suffered his only loss when he faced Rustam Khabilov in 2012 (Rustam Khabilov vs Vinc Pichel), since then he has fought and won just four times beating Joaquim Silva in 2018. Gillespie vs Pichel is on the undercard of Jimmie Rivera vs Marlon Moraes – UFC Fight Night 131. Watch the video and rate this fight!