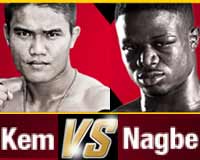 Review: 2014-03-29, the fight between Kem Sitsongpeenong and Victor Nagbe gets three stars thanks to a good finish. Kem Sitsongpeenong entered this fight with a professional kickboxing record of 121-23-4 and he is ranked as the No.3 welterweight in the world, he has already fought twice in 2014 losing the first bout against Vitaly Gurkov (fight valid for the WBC super welterweight title) but then he defeated Toby Smith at Max Muay Thai 6 (=Kem vs Smith).
His opponent, Victor Nagbe, has an official record of 38-15-1 and he entered as the No.7 in the same weight class, he is just 19 years old (ten years younger than Kem) and last year he arrived to the final of “MAX Muay Thai 2013 – 67 kg tournament” but he lost to Saketdao Phetpayathai (=Nagbe vs Saketdao). Kem vs Nagbe is the semifinal of Xtreme Muay Thai 4-man tournament (-70kg). Watch the video and rate this fight!