Review by AllTheBestFights.com: 2021-02-20, mma fight not so exciting: Ketlen Vieira vs Yana Kunitskaya gets two stars.
Kunitskaya vs Vieira is on the undercard of Curtis Blaydes vs Derrick Lewis – UFC Fight Night 185 (also known as UFC on ESPN+ 43 or UFC Vegas 19). Watch the video and rate this fight!

END_OF_DOCUMENT_TOKEN_TO_BE_REPLACED 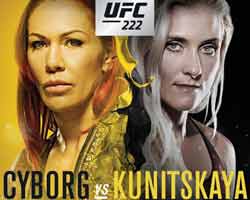 The Ufc women’s Fw and former Strikeforce and Invicta Fc champion Cristiane Cyborg Justino entered this fight with a professional mma record of 19-1-0 (94% ko/tko victory rate – she has never won via submission) and she is ranked as the No.1 womens’ featherweight in the world. She suffered her only loss at her professional mma debut, against Erica Paes in 2005, since then she has won 19 consecutive bouts beating Tonya Evinger (Cyborg vs Evinger) and Holly Holm in 2017 (Cris Cyborg Justino vs Holly Holm).
Her opponent, the Invicta Fc Bw champion Yana Kunitskaya, has an official record of 10-3-0 (80% finishing rate) and she entered as the No.14 women’s bantamweight. She fought twice last year losing to Tonya Evinger (Tonya Evinger vs Yana Kunitskaya 2) and defeating Raquel Pa’aluhi. Cyborg vs Kunitskaya, main event of UFC 222, is valid for the Ufc women’s featherweight title (Cyborg’s second defense). Watch the video and rate this fight!

END_OF_DOCUMENT_TOKEN_TO_BE_REPLACED 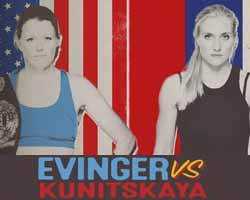