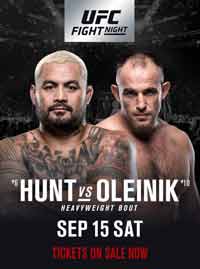 Review by AllTheBestFights.com: 2018-09-15, fight not so exciting between Andrei Arlovski and Shamil Abdurakhimov: it gets two stars.

The former Ufc Hw champion Andrei Arlovski entered this fight with a mma record of 27-16-0 (74% finishing rate) and he is ranked as the No.20 heavyweight in the world but he won just two out of his last eight bouts: against Junior Albini (Andrei Arlovski vs Junior Albini) and Stefan Struve between 2017 and 2018 (Andrei Arlovski vs Stefan Struve); after this bout he has lost to Tai Tuivasa (Andrei Arlovski vs Tai Tuivasa).
His opponent, Shamil Abdurakhimov, has an official record of 18-4-0 (67% finishing rate) and he entered as the No.40 in the same weight class. He lost to Derrick Lewis in 2016 (Derrick Lewis vs Shamil Abdurakhimov) but he came back to win in 2017 against Chase Sherman. Arlovski vs Abdurakhimov is on the undercard of Mark Hunt vs Alexey Oleynik – UFC Fight Night 136. Watch the video and rate this fight!